Translation of original statement, which can be accessed at: https://atencofpdt.blogspot.mx/2018/04/carta-abierta-al-senor-carlos-slim.html 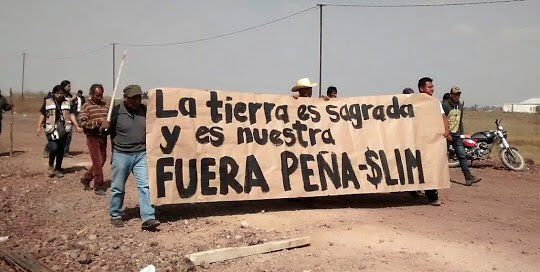 In giving a press conference regarding the new airport, you have forced us to respond to you.

You have interfered in our lands, in our history, and in our lives and we have not done the same in yours.

You say that the new airport is about creating work. You speak of thousands of jobs. We say that it is not capital that creates work, but work that creates capital. Legions of manual laborers and office workers at your service have carried you to the third place on the list of the richest men on the planet. You yourself are the living proof that the worker is the one who creates wealth, and not the wealth the worker. The only thing you want is to make yourself richer with the airport, don’t come to us with stories that you just want to create employment.

You say that five years ago the decision was taken to build the airport, that in fact this started since [President Vicente] Fox. To us, it seems that you are feigning ignorance. But if you doubt it, we inform you that seventeen years ago, we defeated that expropriation decree of our lands and since then we have not stopped fighting to defend them from greedy people without scruples like you, who want to take them from us by any means possible.

You say that canceling the airport will stop development for everyone. In our Mexico, more than 60% [of the population] are poor, and barely have enough to eat. Do you think that those people are frequent air travelers? Sometimes they don’t even have enough for a Metro ticket! Another 30% of the population constitute the middle class, who are in a clear process of losing what they have obtained with their work and adjustments to neoliberalism. Do you believe that they import their food and clothes via air transportation? Millions of Mexicans have never set foot in an airport, and probably never will. But you make a joke out of this situation, claiming that there will be “well-being for five million inhabitants,” that it will be “a paradigm [that] detonates fantastic development,” and that it “is only comparable with the Panama Canal.

Salinas told us that NAFTA would carry us to the First World, and the only thing that arrived to the First World was you. Don’t come to us now with the same silly song. In the global tournament of the moneybags, you want to return to the first place and because of that you want your airport. An airport that will not be from and for the people, but for you and your ilk.

You say that “if there is corruption in the airport it must be punished.” No, Mr. Slim, there has been more than corruption and without punishment. In what you call “that of the airport,” there Alexis Benhumea and Javier Cortés were killed and various female comrades of ours were raped and beaten. And now tell us why there is not a single murderer or rapist in prison?

Peña Nieto in his campaign for president confessed that he orchestrated the operation [in Atenco that led to these deaths, beatings, and rapes]. And you, without apprehension or embarrassment, favor and benefit these repressive actions and invest your money such that, in our lands stained with blood by the government, a new airport will be built – your airport.

And this way, you say that you have put in millions of pesos in investments. Damn it, Mr. Slim! We have put in our dead, our rape and torture, our prisoners, and our persecuted. We have invested blood, tears, and lives.

With all your money can you pay for the damage that has been done to us?
Can your money repair a life cut short? Can you count the cost of repairing a woman who has been violated, or a son who has been taken?

Who has invested more, you or us?

No, Mr. Slim. There are investments and investments. And precisely because of that, we are sure of one thing:
OUR INVESTMENT WILL NOT BE IN VAIN.
Because while you, in your press conference, show yourself shaking and waving around your checkbook; we from our lands, are waving the machete of dignity.

You believe yourself to be invincible and that is to be tested.

You are a millionaire, one of the richest on the planet. We are only peasants, housewives, workers, artisans, but in our veins the blood of ZAPATA still flows, which arriving in our heart with each beat repeats his battle cry: LAND AND LIBERTY.

That is how it is, Mr. Slim. This is about another chapter in the fight of money against dignity. And history teaches us that at the end of the day, the only thing that is invincible is dignity.

And all the neighboring people of the country and the city who today fight and rise up against the Airport of death.
Publicadas por ATENCO - FPDT a la/s 21:04 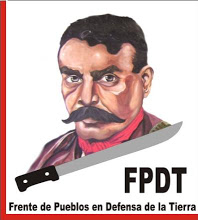